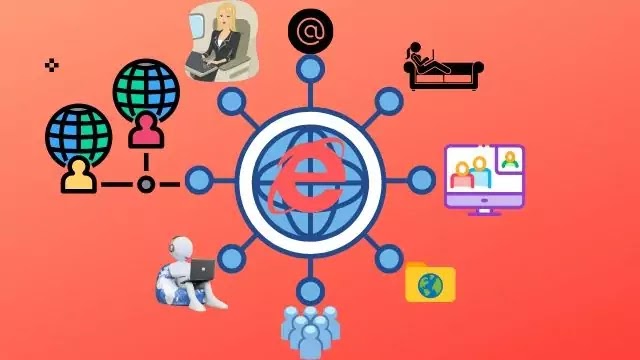 Internet is the biggest network web in the world. It is a global computer network, it provides different types of information and communication facilities. Internet allows the integration of a large number of different computers into a single network with high efficient communication between them.

Internet is a big web of interconnected networks and they use standardized communication protocol to connect with different users. Each network consists of millions of servers, computers, printers, and routers.

These types of network webs are called in internet language and are media and transmission media. Network web is a type of wire, with the help of wire the information and Data are travel all over the world. This type of information and Data are travel in different types like Text, mp3, Video, Image anything. Most of the searches on the internet are Images, videos, mp3, and Text.

The router and server have connected all users to computers. When any message and comment sent any user to another user that time a protocol works. The protocol name is IP (Internet protocol).

What is the Full form of internet?

The full form of Internet is Interconnected network. It is a very big network of Web server networks. Most of the people are called the internet Is the World Wide Web and the same peoples also called the web.
In this network there are lots of servers are there with Public and private company organizations, Schools, hospitals, Collages, research centers.

A dial-up connection is a basic internet connection. These connections are connected through a telephone line.

In this connection, you can access the internet through dial a specific number, then your ISP will open the internet line for you.

A dial-up connection is the most inexpensive internet connection and its internet speed is slow also.

Its internet speed is 25Kbps-56 Kbps. Dial-up allows users to surf web up to 56 kbps with graphics. This connection is known as the “Remote modem access” connection.
DSL connection:

Full form of DSL is the Digital Subscriber line.

In this connection you can on the internet connection and talk on the phone at the same time.

DSL (Digital Subscriber line) uses a router to transport data and the range of connection speed depends on the service offered, which is between 128kbps-8Mbps.
Cable connection:

The wireless connection does not use cables and telephone lines it is much greater than Dial-up, DSL, and Cable connection. Wireless connection use instead of radiofrequency is a very easy way to access the internet anywhere. In wire connections, the speeds vary, and its range is 5Mbps to 20Mbps.
Satellite connection:

The full form of ISDN is Integrated Service Digital Network.

In ISDN you can send you information like voice, data, and video over standard telephone wire and telephone lines. In this connection required both ends of the transmission for the installation of ISDN adapter. The ISDN speed range is 64Kbps to 128Kbps.

History of the internet:

The Internet was first started by the US Army at the Pentagon in the US Department of Defense. A Networking Project named ARPANet means (Advance Research project Agency) was launched in 1969.

In 1970 by two men named ‘Vinton Gray Cerf’ and ‘Bob Kanh’. Therefore, they are also called the father of the Internet. Used in 1972, Retomalishan sent the first email message, and as the benefits of sending information via email became known, its usage grew and thus the network became popular. In 1979, the Internet was first used as a technology in the British Post Office.

In 1984, more than 1000 computers were connected to this network. Gradually, this network was used to exchange information in other areas as well and this network started to take a big form.

The National Science Foundation built a network (NSFNet) in the year 1980 by adding some high-speed computers, which later laid the foundation for the Internet.

The opening of the Internet to the general public in 1989, it started being used for other purposes and there was a huge growth in its field in the same year, Bill Gates company Microsoft also decided to install its operating system on IBM’s computer.

In 1990 The invention of the World Wide Web by Team Burns Lee gave a new dimension to the Internet. The implementation of two-level rules of TCP / IP (networking) through its architecture networking facilitated the exchange of information.

The National Research and Education Network (NREN) was established in the year 1991 to develop a high-speed network for the exchange of information related to education and research.

In 1993, the invention of Mosaic (MOSAIC) software, the first graphical web browser, contributed significantly to the development of the Internet. Mosaic Software was developed under the leadership of Marc Anderson.