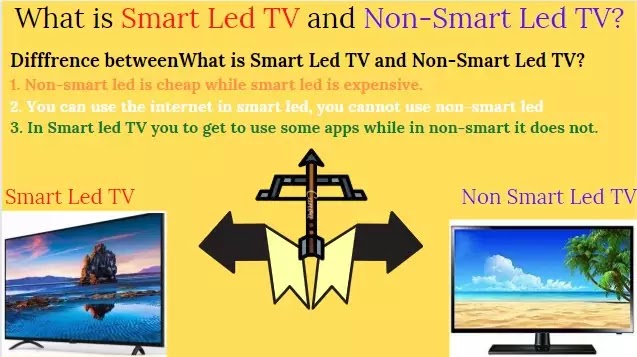 When you go to buy a Led TV, you usually see two types of Led TV. One is smart Led TV and the other is non-smart led TV. Then you get confused about seeing what is Smart Led TV and what is non-Smart Led TV.
Earlier we used to use color TV and black and white TV to watch TV, similarly, in today’s time, we use smart led and non-smart led TV to watch TV. But it is more advanced than color TV and black and white TV.
In Led TV, you get to see very good picture quality and at the same time, its sound quality is also clear. But the picture quality and sound quality of led TV also depend on its brand. Because the technology of every brand and company is different. So before buying Led TV, take care of the kind of brand you are taking.
By the way, Led TV is used to watch movies, comedy, and news. Which we can see from any Led TV. Whether it is smart TV or non-smart TV, let’s know what is smart and non-smart led.
Let’s start…..

What is Smart Led TV?

In today’s time, everyone wants to buy smart led TV because you are given a lot of features in it. smart led TV has everything that is in a simple led and non-smart led. And at the same time, there are advanced features, so it is called smart led TV.
Just as some apps are installed in your android mobile, similarly, in this led TV you also, get some apps to use. Like YouTube, browser, games, etc.
In this also, you are given pen derive and HDMI port, in this you also get screen mirror and wifi, with the help of a screen mirror, you can see the screen of your android mobile on smart led and by connecting it to the internet via wifi and in it can be used

What is Non-smart Led TV?

First of all, we know what is non-smart led TV, it is a simple led TV in which you can watch movies, serial, comedy and news. In this, you are given the option of pen derive as well as HDMI port. Let’s go.
If you use HDMI cable then you get increased picture quality and sound quality. If you want to connect led TV to your computer or from your android smartphone then you can do it through HDMI cable.
In non-smart led TV, you are given more features like FM radio, photo frame, and multi Indian languages ​​, etc.

1. Non-smart led is cheap while smart led is expensive.
2. You can use the internet in smart led, you cannot use non-smart led
3. In Smart led TV you to get to use some apps while in non-smart it does not.
4. Smart led features of wifi and screen mirror are available in non-smart.
5. HDMI led TV has more HDMI ports than non-smart led.
6. You cannot download any app in smart led and non-smart led.
So friends, now you have understood what is smart led and non-smart led TV and you must have found it, so if you like our article, then share it with your friends on social media, and then you will have a problem. If so, please tell us in the comment.
Like our Facebook page to get every information in simple words, where you are provided with the right information, click here to like our Facebook page and follow us on all social media platforms and our post is good Must share.